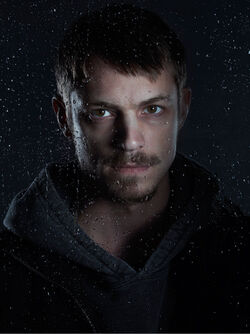 Holder was born on March 29 1979. He grew up in a tough neighborhood and was exposed to various things within his area as a teen, such as drugs. He has a sister, Liz who practically raised him as a child, and a nephew. He had been interested for some time in becoming a detective and assumingly went to college, where he got a degree and eventually got stationed in the Narcotics Department. Because of his past (which also influenced his general persona and clothing style), he was able to connect to teens, as well as adapt a hard-boiled attitude towards anyone He had great success in Narcotics, which soon lead to his Lieutenant promoting him.

Holder feels like a fish out water during his first few days in the Homicide Department. He feels right at home in the grit and ugliness of undercover work, His new boss, Lieutenant Oakes, chides the detective for his shabby attire and considers him incapable of the delicate maneuvering the Rosie Larsen case requires, but despite his inexperience the detective's dogged style compliments Sarah's measured approach.

Sarah's initial wariness and suspicion of Holder softens after she follows him to what turns out to be a Narcotics Anonymous meeting and hears Holder confess to being a "rock-bottom junkie" who once stooped so low, he stole his nephew's prized gold coin to buy drugs. The same day, Holder pulls some strings and has a wiretap placed on Bennet Ahmed's phone that immediately yields results. Bennet is subsequently cleared of suspicion, but Sarah takes the blame for Holder when Oakes expresses his disapproval of the wiretap maneuver.

After Councilman Darren Richmond becomes the prime suspect in the Rosie Larsen murder, Holder tells Sarah to "trust me" and takes her to a gas station near Discovery Park, where the teen's body was discovered. The station attendant describes hearing a girl screaming on the night that Rosie disappeared, followed by the sound of a driver speeding away. Holder later produces a security camera still that provides enough evidence to arrest Richmond. Sarah congratulates Holder for being "a pretty good cop," only to later learn that the camera that allegedly took the shot has been out of service for more than two months. Holder is last seen slipping into a car and telling its driver, "Photo worked. He's going down."

Holder has been working with a new partner, a seasoned well-respected detective named Carl Reddick who's been on the force for 20 years. The Holder of Season 3 is more confident, ambitious, and better dressed than the green detective of Seasons 1 and 2. He's got a new grown-up life, studying for the sergeant's exam and dating an assistant district attorney. But when a new case begins and Sarah Linden re-enters his life, he'll have to decide what kind of detective he really is.[1]

I'm not gonna try and kiss you again, Linden. Unh uh, you missed your chance, Linden

You slayin' those lady's with your ill lady slayin' skills? (To his kid nephew)

Damn! Are there 2-3 days a month you’re not PMS-ing? (To Detective Linden)

Retrieved from "https://thekilling.fandom.com/wiki/Stephen_Holder?oldid=5040"
Community content is available under CC-BY-SA unless otherwise noted.