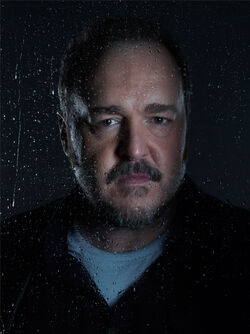 Stanley Larsen is the husband of Mitch Larsen and father of Rosie Larsen, Tommy Larsen, and Denny Larsen and the Brother-in-Law on Terry Marek. He owns and runs the S.A. Larson Moving and Storage company. He was born on Feburary 8th, 1964.

Stan grew up in a rough neighborhood like his wife, and was raised by a blue-collar family. As a young adult, he provided muscle for mobsters and became consumed with alcohol and gambling. When he became a father and husband, he was able to quit these addictions and start up his own moving company, which his wife helped run.

Stan secretly purchases a home in the suburbs, but after Rosie is murdered he is unable to keep up the payments and turns to Kovarsky for help.

When he find outs that Bennet Ahmed, Rosie's teacher, is the prime suspect in his daughter's murder, he drives Bennet to a deserted dock but then releases him unharmed. Back home with Mitch, Stan recalls how being Rosie's father made it easy for him to change his violent ways, saying "I don't want to be that man again." Later, provoked by Mitch, he beats Bennet nearly to death. Upon returning home, Stan learns from Mitch that Bennet is innocent, and he calls 911 and turns himself in to the police.

While Stan is in jail, Mitch learns that he reconnected with Kovarsky and refuses to post Stan's bail. With a therapist at the jail, Stan recounts a dream in which he returns home and finds that "some other guy" has taken his place. When Stan actually does return home after his sister-in-law Terry bails him out, Mitch sobs, "Everything about this place hurts me." Despite Stan's plea that he, Tom and Denny need her, Mitch leaves her family

Retrieved from "https://thekilling.fandom.com/wiki/Stanley_Larsen?oldid=5022"
Community content is available under CC-BY-SA unless otherwise noted.