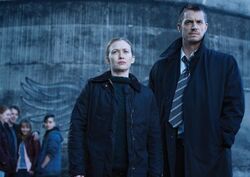 The season features detectives Sarah Linden and Stephen Holder handling the fallout of their actions from the previous season while investigating the murder of a family whose only survivor is a member of an all-boys military academy.

The Killing – which was canceled by AMC, but got a second lease on life last when Netflix ordered a six-episode final season – is looking to cast the role of its lead detective’s mother, a woman described as being in her mid-50s or 60s, with a “startling” physical resemblance to her daughter (played by Mirielle Enos).