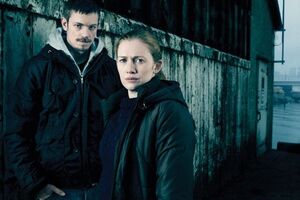 Season 3 of The Killing will begin production in Vancouver on February 25. It starts where Season 2 left off with Sarah Linden and Stephen Holder. A year after closing the Rosie Larsen case, Sarah Linden is no longer a detective. But when her ex-partner Stephen Holder's search for a runaway girl leads him to discover a gruesome string of murders that connects to a previous murder investigation by Linden, she is drawn back into the life she thought she'd left behind.

Season three will focus on a new case, which will be resolved over the course of 10 episodes with a two hour finale. Production on season three begins February 25th in Vancouver.

Retrieved from "https://thekilling.fandom.com/wiki/Season_3?oldid=4718"
Community content is available under CC-BY-SA unless otherwise noted.