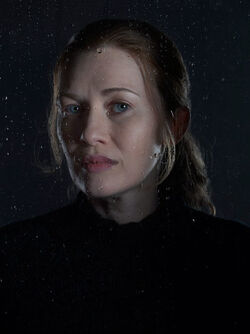 Sarah was born July 17 1973 making her 40 years old at the beginning of the show. Her mother abandoned her when she was 5 years old, leaving her alone in a darkened apartment until CPS found her the next morning.  She grew up in Foster Care, bouncing around different homes until she graduated high school. At some point, Sarah was married to Greg Linden and had a son with him who they named Jack Linden. The two divorced years later, leaving Sarah to struggle with balancing her personal and professional life.  Three years prior to the season 1 pilot, Sarah was working as a homicide detective and having a love affair with her partner James Skinner who was married.  They were both put on the case of Trisha Anne Seward who was found dead in her apartment, with her son Adrian hiding in the closet.  Adrian drew Sarah multiple pictures of a set of trees and hills after she found him in the closet.  The father/husband Ray Seward was number one suspect and eventually convicted of the murder despite Sarah having misgivings about it.  The unresolved feeling Sarah felt from this case resulted in her having a mental breakdown and landing in a psychiatric hospital for a month, presumably ending her relationship with Skinner.  Sometime following this event Sarah fell in love with her psychiatrist Rick Felder, and the two of them are planning on getting married when season 1 begins

One of her hobbies is distance running.

Sarah was and still is a runner.  In her first foster home, she described her foster mother crying all the time and she would run every couple of days.  As an adult we’ve seen her run away from any situation that can cause her pain or commitment.  As a result she tends to run away from relationships, family, friends, and even her job at times.  Pain and death seem to affect her greatly, so the particular line of work she’s chosen has caused her to build up layers of defense mechanisms to protect her, which was all slowly stripped away over the course of the show.  Her early abandonment as a child, has brought on severe abandonment issues in her adult life.  Her history of love interests show a pattern of older men.

Determined to have a normal life separate from the daily horrors of her job, Sarah is ready to walk away, marry her fiancé, Rick Felder, and move her child and her life to Sonoma, California. However, the murder of Rosie Larsen could be the case that changes her life forever, and her determination to catch Rosie's murderer becomes a compulsion, a heinous crime that she must solve no matter what the cost to herself and her carefully made plans. As Sarah and her partner, former narcotics cop Stephen Holder, sort out the details of the case, her initial disdain for his brash approach to police work softens. After Holder produces a photograph that leads to the arrest of Councilman Darren Richmond for Rosie's murder, Sarah congratulates Holder for being "a pretty good cop," before later learning that Holder's photo is a fake.

It's been over a year since Sarah Linden handed in her badge, leaving police work for good. She has started over on Vashon Island, 15 minutes outside of Seattle -- but it might as well be ga world away. Sarah is enjoying a quiet existence, working on the ferry, dating an uncomplicated man, going running every day. Lately she's lost touch with her old partner, Holder, so she is surprised when he shows up on her doorstep with a new case that has similarities to a case she closed three years ago (the case that landed her in the hospital the first time). Sarah will realize that in order to put the past to rest, she may have to reopen old wounds.[1]

Retrieved from "https://thekilling.fandom.com/wiki/Sarah_Linden?oldid=5047"
Community content is available under CC-BY-SA unless otherwise noted.